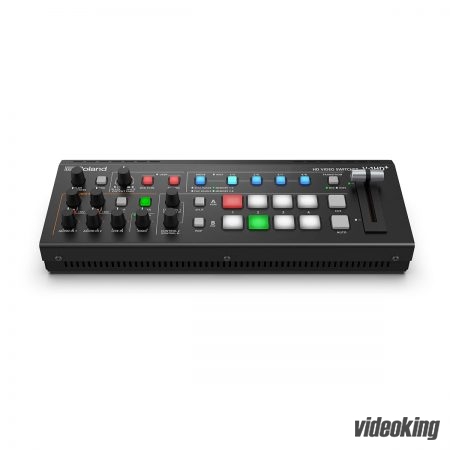 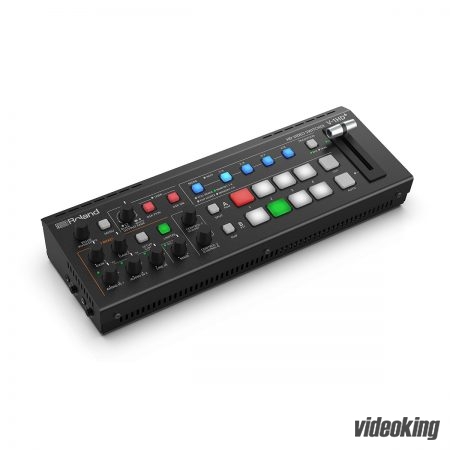 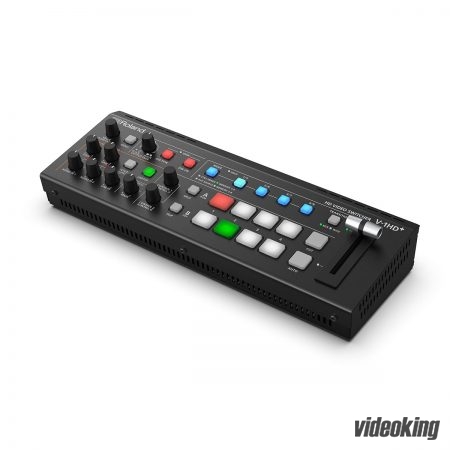 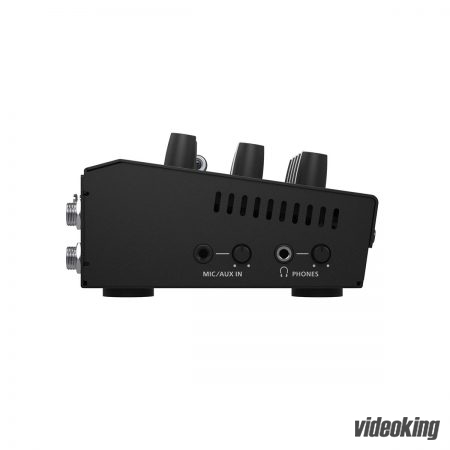 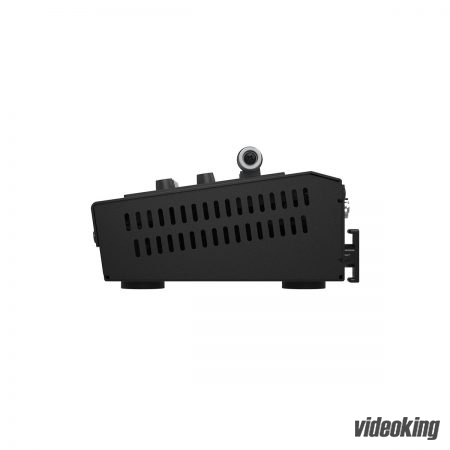 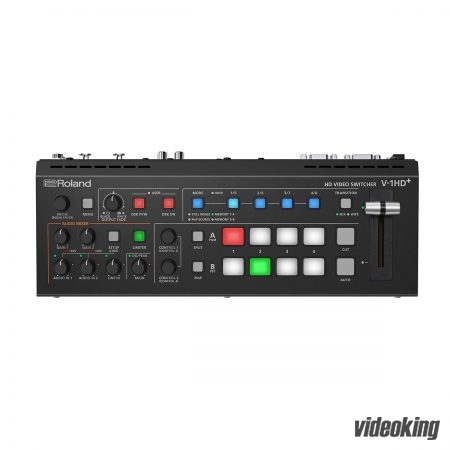 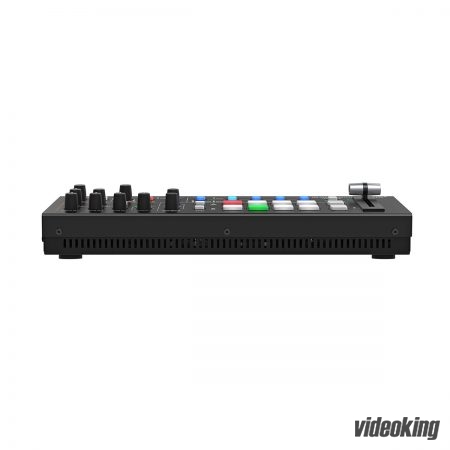 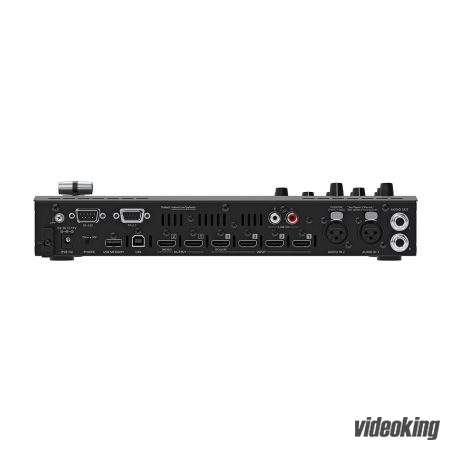 The V-1HD+ is the ultimate compact A/V switching solution for serious visual storytellers. Elevate your creative production process with versatile I/O, a familiar user interface, deep control, and essential monitoring tools that help keep your content looking great and sounding perfect. The V-1HD+ delivers the superior performance you want and the production-critical reliability you demand—plus the Roland support and training resources you deserve.

Say Goodbye to Workflow Workarounds
While many video switchers promise easy workflows, they often require workarounds for optimum results. Too often, those workarounds force you into technical compromises and purchasing extra gear. With its feature-rich design, the V-1HD+ provides the key tools you need to get the job done right.

A Legacy of Success
Since its release in 2015, the Roland V-1HD has been the most popular high-definition, four-channel HDMI video switcher available. The V-1HD+ extends this legacy with a deeper feature set for advanced applications—while still maintaining the simple operation, pro performance, and rugged reliability that’s made the V-1HD a favorite of users around the world.

No-Compromise Video I/O
Video professionals shouldn’t be forced into making technical compromises. With its full-featured video I/O, the V-1HD+ is inspired by your need to do more.
Four Video Inputs and Onboard Scaling
Four HDMI inputs with frame rate conversion let you mix a variety of sources, including cameras, presentation computers, tablets, and video game consoles. And when you have a troublesome source that won’t display correctly, simply plug it into Input 4 and let the built-in video scaler sync and calibrate the image automatically.
Two Video Outputs
Two independent HDMI outputs can be assigned to display one of three different video busses, providing the versatility you need for pro production. For example, you can use one as your main program output for a recorder or livestream, and the second output to turn any HD video monitor into an “up-next” input preview display or expanded multiviewer with 10 windows.

Pro Operation Made Easy
Your passion for a simplified interface led our designers to add quick-action buttons for the most commonly used operations. With one-touch access to the system menu, downstream key on/off, transition type, picture-in-picture, effects on/off, and more, V-1HD+ production workflow is smooth and hassle-free.
The V-1HD+ also includes PGM and PST busses and a transition/fade bar, which are the most-recognized video switching controls in the industry—and the quickest for beginners and volunteers to learn. And with tactile audio volume knobs, signal/peak lights, and unity gain markers, it’s simple and intuitive to adjust sound levels on the fly.

14-Channel Audio Mixing with Effects
The V-1HD+ allows a single operator to do more than switch cameras—they can mix professional sound too. The integrated 14-channel digital audio mixer blends HDMI audio with mic and line sources, and also offers a variety of onboard effects to sweeten mixes.

Audio Inputs
With two XLR mic inputs and selectable phantom power, the V-1HD+ lets you bring pro-grade microphones into your productions, including condenser broadcast mics. There’s also an 1/8-inch input for a lavalier mic or stereo audio source like a smartphone, plus another stereo input on RCA jacks. Embedded stereo audio from the four HDMI inputs can be included in your mix as well.

Audio Outputs
With the V-1HD+, there’s no need for a dedicated small audio console. Distribute analog sound to a PA system via two balanced ¼-inch TRS outputs, and use embedded digital audio in the HDMI outputs to feed recorders and livestream broadcasts.

Audio Effects
Leave the outboard gear in the recording studio—each audio input on the V-1HD+ has its own three-band equalizer, high-pass filter, compressor, and noise gate, plus a sync delay to align audio with video if needed. The XLR and 1/8-inch inputs also include de-essers to clean up vocal sounds in real time. And with the limiter, three-band equalizer and compressor on the main outputs, you can deliver broadcast-quality sound every time.

Multiviewer Display
A 10-window multiviewer display can be applied to one or both HDMI outputs, helping you manage productions in real time. Cue up camera shots, preview presentations, and choose stored still images before taking them live to the program feed. Camcorder recording status can be monitored as well.

Audio Monitoring
Even if your video looks perfect, poor sound will ruin the entire production. With the V-1HD+, you can always keep track of your audio quality. Each analog input has its own signal/peak indicator, and headphones can be plugged in to monitor the overall audio feed. When using the multiviewer display, signal level meters are shown for all inputs and the main outputs.

Keying
The DSK (downstream keyer) layer lets you independently composite a picture-in-picture (PinP) window on a video feed, which is especially useful for live and online hybrid events. For example, when displaying onscreen graphics for a live presentation, you can also overlay a camera shot of the stage speaker that’s only viewable by the online audience.

Still Images
When using the V-1HD+, you’ll never have to leave your audience with a blank screen when the presentation stops, the meeting goes on break, or the camera power goes down. Simply call up one of four still images you’ve stored in the V-1HD+, or capture stills from a connected input source. And with the versatile effects engine, these images can be used as DSK lower thirds or full-screen backgrounds.

Deep Control
Gain even more control over your productions with these advanced V-1HD+ features.

Camera Tally
A camera tally light visually directs talent to look toward the active camera, and also lets everyone know when the camera is live and „on-air.“ The analog tally output on the V-1HD+ can be wired to most broadcast camera systems—refer to the V-1HD+ Reference Manual for wiring specifications.

Recording Control
Many technical elements contribute to a successful recording—but forgetting to hit the record button means the difference between getting paid for the job or not. Via HDMI, you can trigger Atomos recorders to start and stop recording, bringing remote-control convenience to your busy workflow.

Legacy Support
Budgets don’t always allow you to upgrade every component in your video system at the same time. The V-1HD+ can interface with legacy systems and components via its RS-232 port, allowing you to keep working while saving up for that new piece of gear.