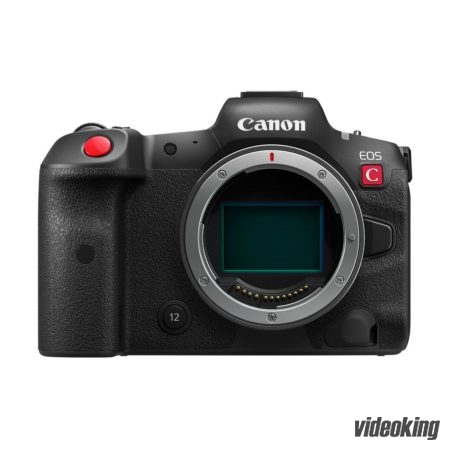 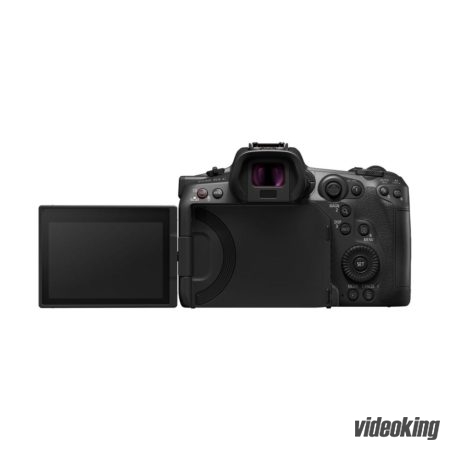 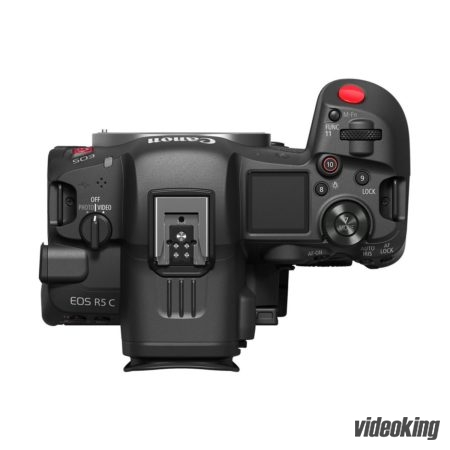 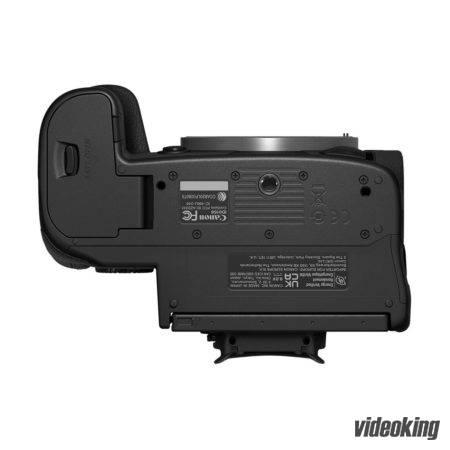 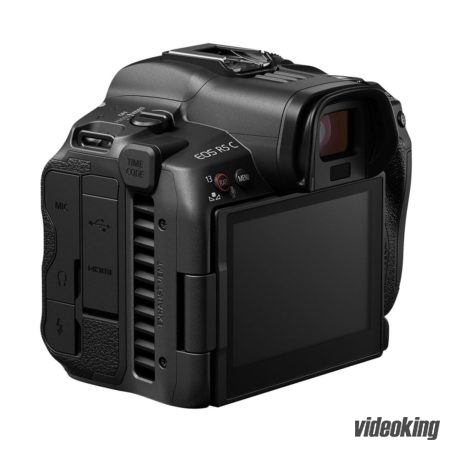 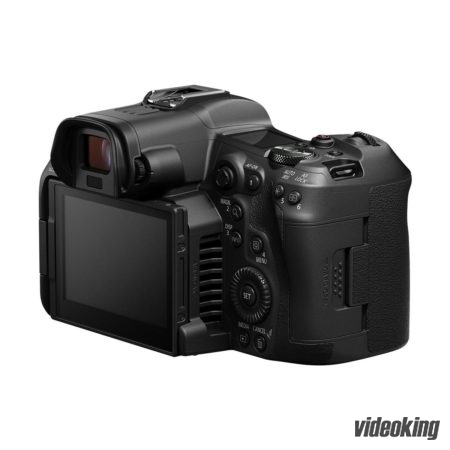 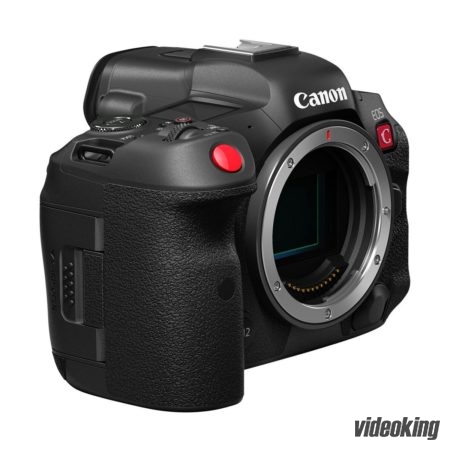 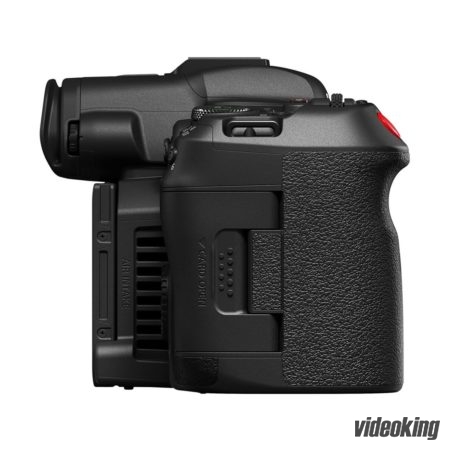 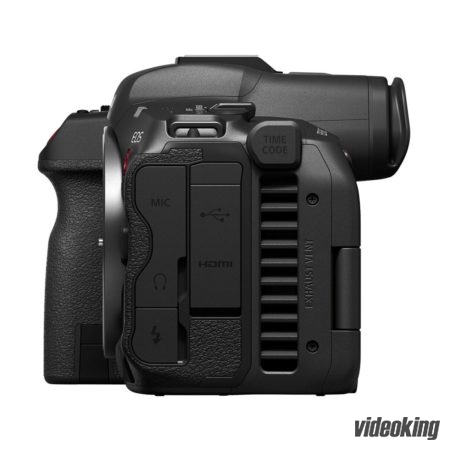 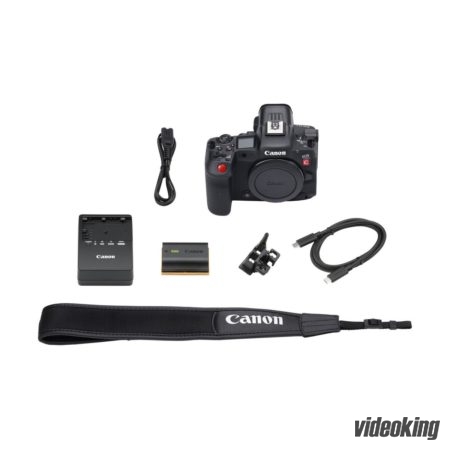 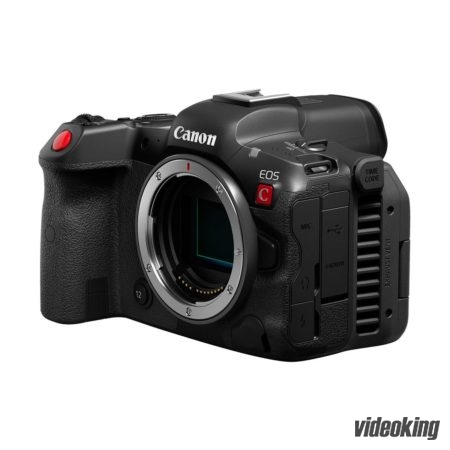 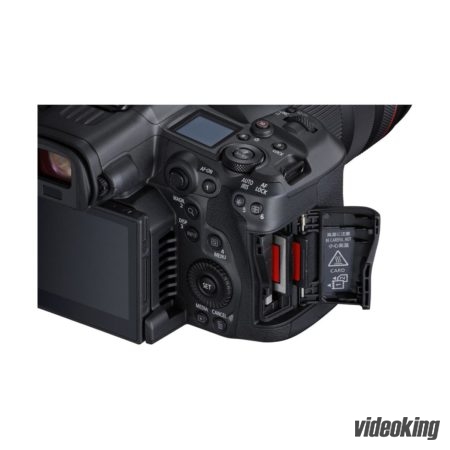 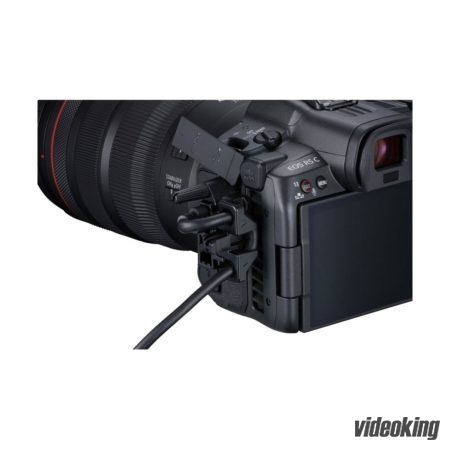 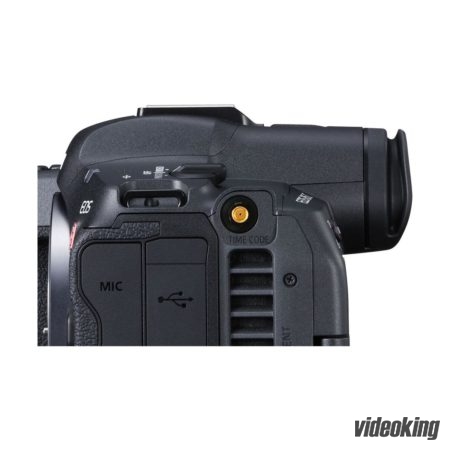 Video Control for the Dedicated Video Professional
As soon as the EOS R5 C’s main switch is moved to the „video“ position, the familiar Cinema EOS menu system and interface take over. Expected high-level video features such as waveform monitors, video codec options, and extensive audio control become available, greatly expanding the EOS R5 C’s video potential for the experienced camera operator or video content creator. During „photo“ operation, menus are nearly the same as they are on the EOS R5 camera.

Ergonomic EOS Design
The EOS R5 C camera’s body design is incredibly compact and lightweight. When paired with a Canon RF lens (or EF lens using the Mount Adapter EF-EOS R), it offers outstanding performance that fits easily and comfortably in your hand, making handheld shooting a breeze whether shooting video or still images. Its electronic viewfinder is optically extended, for eye-level viewing similar to the conventional EOS R5 camera, and it uses the same ergonomic grip design.

The EOS R5 C camera supports RAW output via HDMI and ProRes RAW recording with compatible external recorders such as Atomos devices. By connecting the EOS R5 C camera with a supported external recorder, users can shoot in Apple ProRes RAW at up to 8K30. Proxy data can also be simultaneously recorded to an SD card in-camera, providing efficient post-production operations.

Expanded Interface for Professional Needs
The EOS R5 C camera provides a timecode input/output terminal for easy synchronization when shooting with multiple cameras and other interfaces. A cable protector is also included as standard to prevent cable disconnection or damage to the terminal if strong force is applied when connecting interface or HDMI cables.

4K and 2K Oversampling
The EOS R5 C camera reads out signals for all effective pixels from its full-frame 8K sensor, enabling 4:2:2 10-bit high-definition recording through oversampling during 4K and 2K video recording. A high-definition debayer algorithm has been included and the 4K generated from the abundant RGB data of the 8K sensor enables more refined imaging capabilities with less incidence of moiré, false colors, „jaggies“, and noise.

Up to 4K120 Slow and Fast Motion Recording Mode in 4:2:2 10-Bit
The EOS R5 C camera can record High Frame Rate (HFR) movies at up to 120p at DCI/UHD 4K resolutions (4096 x 2160/3840 x 2160) in 4:2:2 10-bit without cropping the sensor. Great for shooting scenes full of fast-paced action, the EOS R5 C camera’s fast and intuitive autofocus remains enabled even during HFR recording, making it ideal when shooting from a gimbal or drone, delivering outstanding focus accuracy at HFR or at common frame rates.

Simultaneous Audio Recording Enabled with HFR
Unlike some other cameras where audio is not recorded during HFR shooting, the EOS R5 C camera can record .WAV audio as a separate file from video, virtually eliminating the need for separate audio recording and delivering HFR video and audio files in one convenient device when shooting slow motion or fast motion video.

Canon Log 3 Expands Expressive Possibilities
The EOS R5 C camera features Canon Log 3, which is found in many Canon cameras and works with multiple Canon EOS and Cinema EOS cameras. The wide dynamic range can be used for a wider range of grading after shooting. Canon Log 3 is a gamma that is designed for simple grading, such as tightening dark areas and adjusting tones. It carries on Canon Log’s ease of use with less noticeable noise. It can also be used when shooting with other Cinema EOS system cameras such as the EOS C300 Mark III and EOS C70 cameras.

Enhanced Image Stabilization
Enhanced image stabilization is achieved through coordinated control when Canon’s RF lenses with optical IS are combined with the EOS R5 C camera’s electronic IS when shooting XF-AVC or MP4 formats. With an RF lens that has optical IS and the electronic IS in the EOS R5 C camera, coordinated control helps achieve the optimum hand-shake correction effects. This helps achieve better anti-vibration performance than with conventional IS-equipped EF lenses (using optional Mount Adapter EF-EOS R) and electronic IS together.

Dual Pixel CMOS AF with iTR AF X
Canon’s Dual Pixel CMOS AF technology uses every pixel on the imaging sensor to detect focus, and also to capture actual image information achieving both high precision focusing and high image quality. With most Canon RF and EF lenses, AF for video can be carried out over approximately 80% of the vertical and horizontal area of the screen.

DIGIC X Image Processor with an ISO Range of 100-51200; Expandable to 102400
Delivering high standard and expanded ISOs (for still images), and a broad range of options to help enhance shooting in varied and fast-changing lighting situations, the EOS R5 C camera can shoot at expanded sensitivities down to ISO 50 (L) and up to 102400 (H).

Head and Eye Detection
Select „People“ as the EOS R5 C’s „subjects to detect,“ and like the EOS R5, it can focus on a detected person’s eyes, face, head (if a face is obscured), or even entire body if a head cannot be detected.

Animal Detection
For still images, the same revolutionary Animal Detection AF as the EOS R5 can identify and focus upon eyes, faces, or bodies of birds, cats, and dogs, and can do so over virtually the entire image area with many Canon lenses. This opens up game-changing possibilities for wildlife images, even with subjects as challenging as birds in flight.

Vehicle Detection
Carried over from the high-performance Canon EOS R3 camera, the EOS R5 C adds Vehicle Detection AF as a subject detection option, during still-image shooting. Cars and motorcycles, especially in racing applications, can be identified and tracked, even at high speeds. User-selectable Spot Detection lets the R5 C’s AF detect the helmets of an exposed rider or driver, and put focus upon them, instead of the leading edge of the vehicle.

AF Area Flexibility
Select the size of the active AF area from a precise single AF point to the entire available AF area and rapidly move a user-selected area via the 8-way multi-controller on the back of the camera. The EOS R5 C has the same range of choices for still-image AF method selection as the EOS R5 camera.

AF Area Coverage of Approx. 100% x 100% for Still Images
The EOS R5 C camera features an expansive focus area of approximately 100% horizontal and 100% vertical when working with select RF and EF lenses, during still-image shooting. With older EF lenses, or with EF Extender types I and II, the EOS R5 C focuses on approx. 80% horizontally and 80% vertically of the image. This means fast and impressive focusing even when composing your subject far from the center of the frame.

EV-6 Low-Light Autofocus
Great for night photography or in very low-light settings, the EOS R5 C camera’s brilliant AF can operate for still images in light as dim as a light rating of EV-6 where other AF systems may fail or search. Still-image AF is possible with lens + Canon RF tele extender combinations having maximum effective apertures as slow as f/22 – meaning AF is still possible with the RF800mm F11 IS STM + RF2x extender.